Wang Dongfeng emphasized at the provincial conference on religious governance 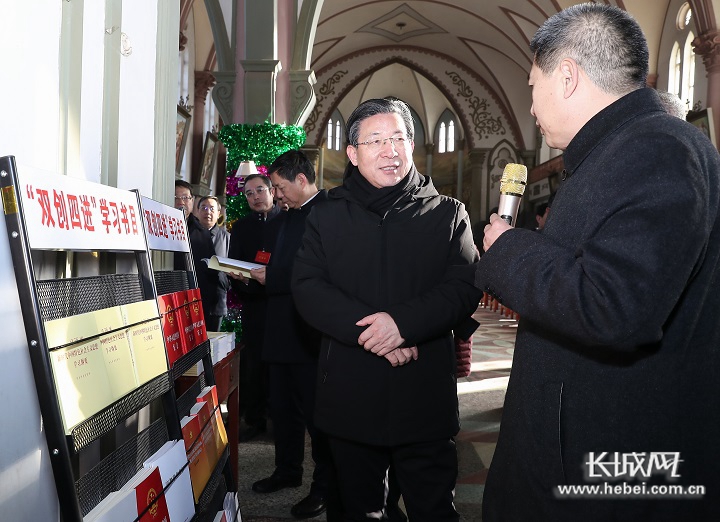 On December 30, the provincial religious governance work conference was held in Cangzhou. During the meeting, the participating comrades went to the Zhangzhuang Catholic Church in Xian County, Cangzhou City to inspect the situation of religious governance in our province. Photo by Great Wall New Media reporter Pang Xiaowei

On the 30th, the provincial religious governance conference was held in Cangzhou. At the meeting, Wang Dongfeng, Secretary of the Provincial Party Committee and Director of the Standing Committee of the Provincial People's Congress, emphasized at the meeting that it is necessary to adhere to the guidance of Xi Jinping ’s new era of socialist ideas with Chinese characteristics and thoroughly study and implement the series of important speeches by General Secretary Xi Jinping on religious work and the Fourth Session of the 19th Party The spirit of the Plenary Session, comprehensive implementation of General Secretary Jinping's instructions on important work in Hebei and the decision-making and deployment of the Party Central Committee, further perfecting the "three systems" of "double innovation and four advances", building a practical and effective religious governance system, and comprehensively improving the institutionalization of religious work , Rule of law, standardization.

Wang Dongfeng pointed out that since the 19th National Congress of the Party, the Provincial Party Committee has made the capital's political "moat" a political responsibility and a political priority, and has promoted new achievements in religious work: Persist in strengthening the party's overall leadership and form a five-level secretary to grasp religion The new pattern of work; adhere to the party's basic guidelines for religious work, make new progress in the effectiveness of "guide"; adhere to the direction of sinicization of religion, and achieve new breakthroughs in guiding religion to adapt to socialist society; adhere to the management of religious affairs in accordance with law, New progress has been made in addressing prominent issues in the field of religion. We must fully affirm our achievements, consolidate the results of our expansion work, and at the same time keep a clear head, grasp the new situation and new tasks of religious work, solidly solve outstanding problems in the field of religion, continuously improve the religious governance system, improve governance effectiveness, and safeguard the capital's security with the stability of Hebei. To serve the overall situation of reform and development of the country with the advancement of Hebei. On December 30, the provincial religious governance work conference was held in Cangzhou. During the meeting, the participating comrades went to the Lijia Garden Christian Church in the Canal District of Cangzhou to inspect the situation of religious governance in our province. Photo by Great Wall New Media reporter Pang Xiaowei

Wang Dongfeng emphasized that we must adhere to political standing, thoroughly study and implement the spirit of General Secretary Xi Jinping's important exposition, and earnestly enhance the sense of political responsibility and mission of doing a good job in religion. Doing a good job in religion is an inevitable requirement for maintaining the stability of the society and the long-term stability of the country. We must deeply understand the significance of doing a good job in religion and firmly and firmly act as a "moat" in the capital's politics. The important content of modernization must correctly deal with various contradictions in the field of religion in accordance with the law, and effectively transform the significant institutional advantages into strong governance effectiveness. It is a realistic need for the comprehensive construction of a strong economic province and beautiful Hebei in the new era. Belief in the enthusiasm of the masses to ensure the implementation of the Party Central Committee's decision-making arrangements. Departments at all levels in the province must consolidate their thinking and actions to the important instructions of General Secretary Xi Jinping and the spirit of the Fourth Plenary Session of the 19th Central Committee of the Party. "Two maintenances" to continuously enhance the implementation of political consciousness, ideological consciousness, and action consciousness. 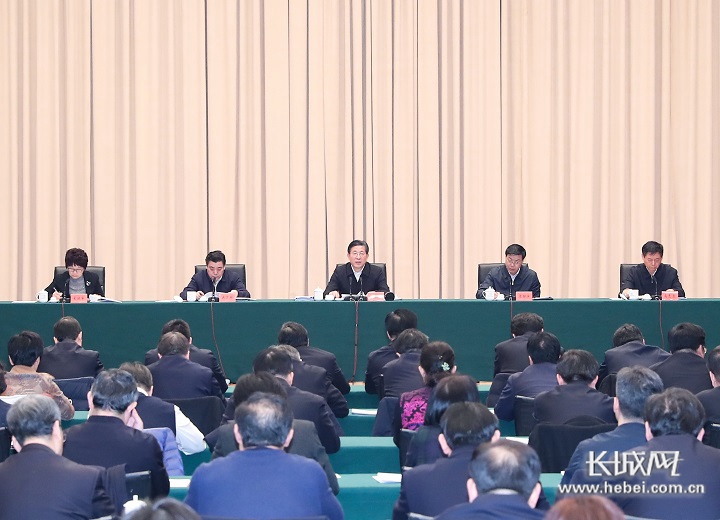 On December 30, the provincial religious governance work conference was held in Cangzhou. This is the meeting site. Photo by Great Wall New Media reporter Pang Xiaowei

During the meeting, the participating comrades went to the Zhangzhuang Catholic Church and "Love Station" in Xian County, Cangzhou City, the Lijia Garden Christian Church in the Canal District, and the Great Mosque in Xinhua District to inspect the situation of religious governance in our province.